Since 1971, Continental Plastic has been a manufacturer and worldwide supplier of products for veterinary practices and artificial insemination of domestic livestock. 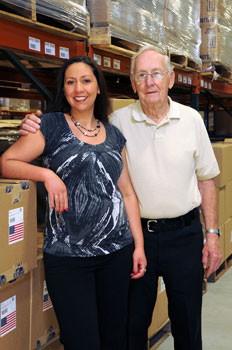 Continental Plastic Corp., founded February 1st, 1971, was co-owned by Richard Alter and Elton Feffer. Both individuals had strong manufacturing and administrative backgrounds in the agricultural industry prior to founding the company. They were successful in meeting the needs of their customers and have maintained that customer focus as Continental grew and expanded over the years.

In January, 2008, Richard stepped down as co-owner and President of the company. He still assists the company today on a consulting basis. Elton now assumes sole ownership and is active as President of Continental. He has since asked his daughter, Becky Feffer Wolf, to join the staff and assume the role of Vice President. The company currently employs over 90 people in the manufacturing facility and office.

The manufacturing facility and administrative office are located in southeastern Wisconsin, in the town of Delavan. Delavan is a two hour drive north from Chicago, Ill., or one hour southeast from Madison, Wis.

Continental is able to offer extremely competitive pricing, as most products are produced at our manufacturing facility in Wisconsin. Customers in every state in the US and over 60 countries worldwide call Continental-produced products their product of choice.

Looking for Something Specific?